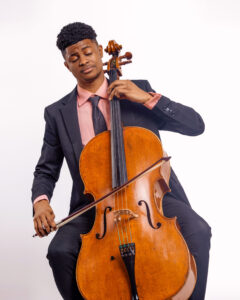 Acclaimed for his stellar stage presence and joyous musicianship, cellist Sterling Elliott​ is a 2021 Avery Fisher Career Grant recipient and the winner of the Senior Division of the 2019 National Sphinx Competition. Already in his young career, he has appeared with such major orchestras as the Philadelphia Orchestra, the New York Philharmonic, the Boston Symphony, the Cleveland Orchestra, the Los Angeles Philharmonic, the Detroit Symphony, and the Dallas Symphony, with noted conductors Yannick Nezet-Seguin, Thomas Wilkins, Jeffrey Kahane, Bramwell Tovey, Mei Ann Chen and others. This summer, he made his Aspen Festival debut, performing the Brahms Double Concerto with Gil Shaham, and he made his German debut in Munich in May 2022, performing chamber music with Daniel Hope.

The 2022-2023 season will see his debuts with the Colorado Symphony, Cincinnati Symphony, North Carolina Symphony, and Ft. Worth Symphony, among others, with return appearances including the Buffalo Philharmonic. He will appear in recital under the auspices of the San Francisco Symphony, the New York Philharmonic, Shriver Hall in Baltimore, the Tippett Rise Festival and Capitol Region Classical in Albany NY. In October he participates in the Caramoor Music Festival’s prestigious Evnin Rising Stars series, a weeklong program of coaching and chamber music culminating in a performance in Katonah NY.

Fast becoming a favorite on the summer festival circuit, Sterling has appeared at Music@Menlo, Chamberfest in Cleveland and Chamberfest Northwest in Calgary, Music at Angel Fire and the La Jolla Chamber Music Festival.

Sterling is a two-time alum of NPR’s From the Top where he was a recipient of a scholarship from The Jack Kent Cooke Foundation and performed several concerts in Switzerland at the 2019 World Economic Forum. He is a Young Strings of America ambassador for SHAR Strings. In 2019, he was the first recipient of The National Arts Club’s Herman and Mary Neuman Music Scholarship Award. In Spring 2022, Sterling participated in Performance Today’s Young Artist Residency, which featured educational events, interviews and a feature on the nationally syndicated radio program.

Sterling Elliott is currently a Kovner Fellow at The Juilliard School where he is pursuing his Master of Music degree studying with Joel Krosnick. He completed his undergraduate degree in cello performance at Juilliard in May 2021. He currently performs on a 1741 Gennaro Gagliano cello on loan through the Robert F. Smith Fine String Patron Program, in partnership with the Sphinx Organization.